With her unique, genre-blurring raguwavy sound and a voice that blends eloquence, majesty and attitude in equal measure, no-one sounds like Priya Ragu. Her boundary-pushing take on R&B and electro-pop is infused with sonic elements that reflect her South Asian background. As shown by her critically adored debut mixtape ‘damnshestamil’, it’s an approach that makes her a truly global proposition. Every aspect of Priya’s profile indicates that she’s set to be one of the hottest breaking artists for 2022, ahead of the release of her debut album on Warner Records.

Priya Ragu recently made her stunning TV debut with an incredible performance of her latest track ‘Lockdown’ on ‘Later… with Jools Holland’. Her current momentum resulted in her being chosen as one of Amazon Music’s Breakthrough Artists for 2022 and Artist to Watch for 2022, adding to other recent acclaim of being named as a Spotify First Listen Radar artist, a VEVO DISCR Artist and a Deezer Focus Artist.

Similar attention is building momentum at radio, with a diverse array of support underlining her far-reaching potential. ‘Lockdown’ spent five weeks on the Radio 1 playlist and was one of three of her tracks to be chosen as Tune of the Week. In addition, further playlists and key support have come from the BBC Asian Network, 1Xtra, Apple Music 1 and 6 Music. The result is an engaged and ever evolving fanbase. Priya has already received 35 million views at TikTok, reached an audience of 25 million at Instagram, and was highlighted as Facebook’s Global Artist of the Day.

In the live arena, Priya has played four UK shows as guests to Jungle, performed at All Points East and Montreux Jazz Festival, and is currently embarking upon her debut European headline tour, which includes a sold-out London show at the Jazz Café. Plans are taking shape for 2022 too. After featuring on their current album ‘Loving In Stereo’, she again teams up with Jungle for their European tour in January, and will play sets at Eurosonic, The Great Escape and Primavera.

Working with her producer, co-writer, and brother Japhna Gold, Priya’s beguiling music is bathed in the sounds of their heritage, from stunning Kollywood samples (originating from Tamil Nadu in South India) and Krishna mantras to traditional tabla and the Tamil language. Her music is a snapshot of Sri Lankan and South Indian sounds; from the street dances of Kuthu to religious chants, to the influence of musicians such as Ilaiyaraaja, Deva and A.R. Rahman. Yet all the while remains solidly of the moment.

That style simmers throughout the ‘damnshestamil’ mixtape, which stirs those eclectic elements into an original, global-facing modern pop sound. Priya describes the mixtape as “The most pure and sacred work that I have ever put out into the world. I've carried it within me for a very long time until I found a way to translate it into these songs.”

Thematically, Priya’s lyricism focuses on spirituality and possibility, yearning and heartbreak. She mostly sings in English, although occasionally Tamil seeps through to a level far beyond most contemporary music. They’re united by a desire to battle expectations. As she explains, “I want to challenge the stereotypes of Sri Lankan people essentially being limited to cooks, cleaners or shop workers. People who are looked down upon. People who are rarely envied or desired. I’m proud of who I am, and my music celebrates that.”

Priya’s charismatic and optimistic debut single ‘Good Love 2.0’ is a particularly compelling representation of her roots. At heart a perfect love song, it was inspired by Priya’s parents’ relationship. She takes up the story: “They met in the city of Jaffna, in Sri Lanka. My grandparents were strictly against the idea of them having a ‘love marriage’ because they really believed in arranged marriage. So, for my parents to choose each other, that was making quite a statement at that time. It was tough for them to begin with, but they made it through.”

That positivity extends to another song, ‘Chicken Lemon Rice’. “It’s a celebration of unity and diversity,” she states. “It’s here to commemorate all the beautiful cultures of the world. The world is not black and white, it’s colourful. We can come together and still be ourselves whilst celebrating different heritages and learning from each other.”

Yet just as Priya possesses an eloquence when it comes to looking back, she’s just as adept as exploring the emotions of the current moment. She reacted to the chaos of Covid by penning ‘Lockdown’. “I wrote it when I was feeling particularly isolated from the people I love. It’s about dealing with being alone in lockdown and wanting to feel the energy of another person’s presence. Not for love, but for friendship, guidance, and to help stop getting too down about the situation.”

Priya was born and raised in Switzerland following her parents escape from the Sri Lankan civil war in the early eighties. They initially arrived in Germany before later settling in St. Gallen, Switzerland, where Priya and Japhna were raised. Her father worked for the post office and her mother was a pharmacist's assistant. Their upbringing was peaceful and traditional, interspersed with weekly family gatherings at which relatives would gather to eat fried spicy chicken and informally perform music on everything from “a plastic laundry basket to spoons and forks.”

Her voice is extraordinary. It is inherently warm and melodious yet shot through with an effortless emotion as able to express joy as it is desire. Priya discovered she could sing when, at the age of 10, her father persuaded her to join a band that he had formed to raise money for back home. Her father played tabla, Japhna was on keys, and Priya was the reluctant lead singer. Though the vocals of the spiritual, traditional Eelam music were too high for Priya, something was awakened. She heard her own voice and she liked how it sounded.

As she grew older, the Swiss and Sri Lankan cultures began to clash. Priya’s parents were strict, particularly with her: she wasn’t encouraged to listen to Western music or hang out at the mall after school. Often, she was one of two brown kids at school. “It increasingly became a struggle for me to connect with my culture. At that point, being Sri Lankan meant speaking a funny language, curry, corner stores, people who didn’t dress fashionably. It wasn’t cool to be Sri Lankan then.”

Her musical ambitions began to take root, but there was little inspiration for a young brown girl who wanted to perform. Priya couldn’t sing as high as the playback singers in the Kollywood films and when she looked at the Western pop charts there was no-one that looked like her. Hearing the Fugees felt like a revelation. Aware her parents would disapprove, Priya would sing along quietly in her bedroom for hours each day, entranced by the seemingly effortless melodies that infused the vocals of Lauryn Hill and Brandy.

Later, her tastes extended to James Taylor, Nina Simone, India.Arie, Musiq Soulchild, Donny Hathaway, Aretha Franklin, Stevie Wonder and The Beatles. Despite her growing cultural conflicts, the sound of Kollywood fascinated both Priya and Japhna. Mostly it was the films of Tamil superstar Rajinikanth, including ‘Padayappa’ (1999), whose soundtrack was produced by A. R. Rahman. The Chennai composer and producer’s contributions to films such as 1995’s ‘Bombay’ and ‘Kadhal Desam’ (1996) were also highly influential on the pair.

At 16, she shyly performed Alicia Keys’ ‘Fallin’’ to her brother. He insisted she perform at a show he was doing with his rap group later that week. Priya’s live debut was cut short when her father discovered her plans after reading her diary and forbade her from attending. “It was the worst day of my life, I was devastated,” she recalls. “It made me feel so unheard, so silenced.” Though it didn’t stop Priya singing, it made her ambitions more covert, and she decided unless she achieved true success, she wouldn't tell her parents about the music she made.

Throughout this time, she would sneak out to jam sessions and open mic nights, singing backup for local Swiss artists. It was, she thought, enough. She at least got to perform. But internally she was fighting with herself, struggling to push away an increasingly desperate desire to write and sing and perform her own music. Her parents were keen for Priya to get married and she wrestled with her own insecurities and their wishes. Eventually, something snapped. She had to see what would happen if she put everything into music.

Priya decided to head to America for six months to focus on songwriting. Needing somewhere to stay, her friend, the rapper Oddisee offered Priya his Brooklyn studio and she left for the US. Collaborating remotely with Japhna, they created several tracks over the six months she was in New York, and the work continued when she returned to Zurich.

“In some ways it feels like the universe was just waiting for me to be ready. I’m not sure I could have made the music I’m making at any other time. It’s only made more special by the fact I get to do this with my brother. It’s so magical.”

As quickly and easily as the decision to move to New York had arrived, everything else followed similarly fortuitously. She started writing songs about breaking out of the boundaries of expectation, and the reactions were instantaneous as Priya cultivated a small but highly engaged following. A subsequent deal with Warner Records amplified that attention.

Priya’s success has also opened up her relationship with her parents, who are now incredibly supportive of their daughter's career. “My parents didn’t have the luxury of ambition,” reflects Priya. “It was about surviving and providing for the kids. We owe them a lot. They’ve been through a lot.”

For Priya Ragu, music isn’t about making money or courting fame. It’s a necessity, a need, an overwhelming desire. She concludes, “It’s only now, finally, that I feel truly at peace with myself. I am, for the first time in my life perhaps, fully at ease.” 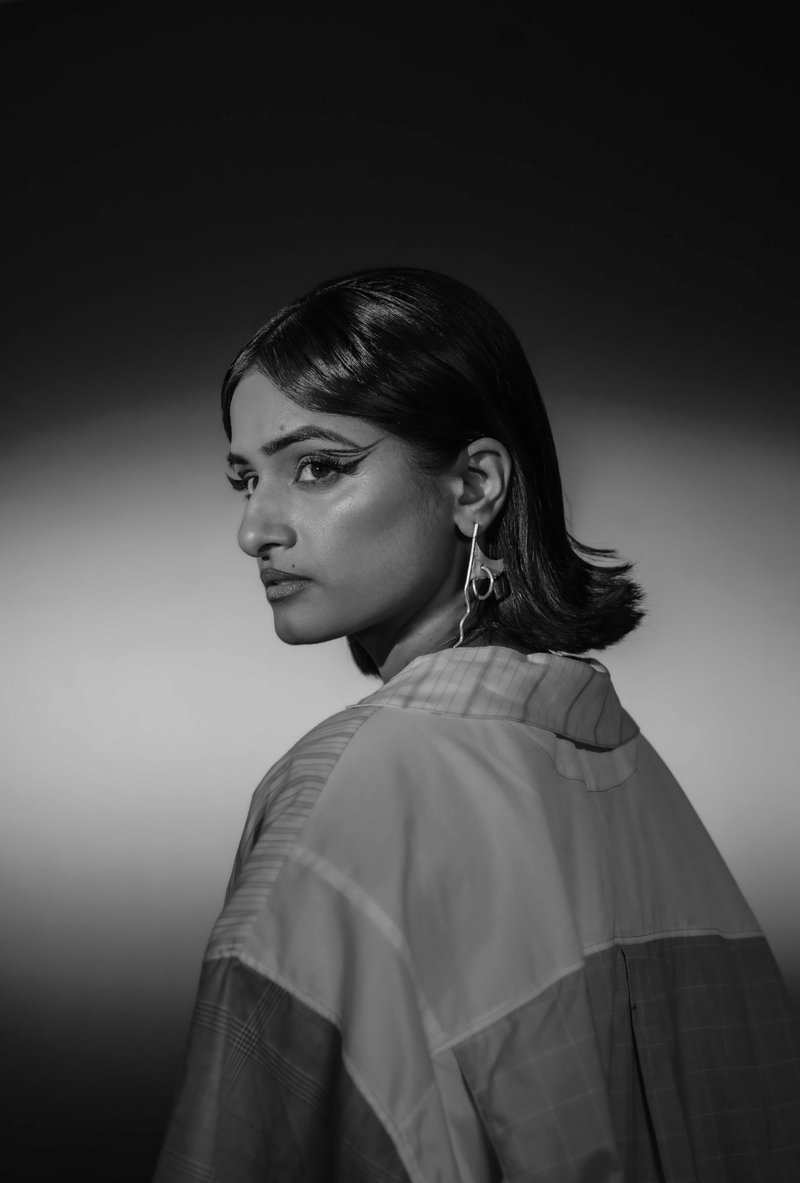